When configuring frequently occurring error notifications, you can now filter them by user impact thresholds so that you only get alerted when an error impacts a certain number of users in a timeframe, such as 100 users in an hour.

User thresholds filters are available to configure notifications for email, Slack, and other team chat integrations. They can also be applied to automatic issue creation rules for Jira and other issue trackers.

We’re excited to introduce an integration with Linear, allowing teams to automatically create issues in Linear from Bugsnag to manage bug fixes and streamline debugging workflows.

You can configure an integration with Linear in Project Settings > Issue tracker. Learn more about issue tracker integrations in our docs.

C# events and exceptions raised while the device is disconnected from the internet are now persisted until connection is restored.

Similarly, when running on Windows or WebGL, events and sessions will persist until a connection is available and the device ID will persist between game launches.

Find out more in the changelog (releases 6.2.0 and 6.3.0) and upgrade your notifier to gain access to these updates.

We've released a major version of our Cocos2d-x notifier (v2), to include several new features, reliability improvements, and bug fixes.

See the Cocos2d-x upgrade guide to get started.

Make data-driven decisions about new feature rollouts and gain confidence in accelerating releases with the observability and actionable insights in the Features Dashboard.

Real-time visibility into errors introduced by each feature or experiment variant helps you understand how it is impacting the quality of the application and user experience.

Learn more about the new dashboard in our blog and get started by reading our docs.

Learn more in our recent blog and get started by reading our docs.

We've released a major version of our Unity notifier (v6). It includes UPM (Unity Package Manager) support, automatic Bugsnag initialization prior to the first scene being loaded, and consistency and usability improvements.

See the Unity upgrade guide to get started.

Check out our blog to learn more and get started by reading our docs.

We've added a new section in the settings sidebar named 'Admin controls', this initially contains the following set of tools:

You can control access to this new section by configuring email addresses (comma separated) under Other > Admin controls access.

Customers who wish to also remove the class that contains the affected code (JndiLookup) can upgrade to this release.

We anticipate making a further release in January to include an updated version of Elasticsearch when it is available.

The Elasticsearch service included as part of the Busgnag installation may be vulnerable to CVE-2021-44228 (log4j remote command execution) prior to this release, as input to the Bugsnag services could potentially be logged to the Elasticsearch slow log and therefore a crafted input string could be used to exploit the log4j vulnerability. We believe the risk to your Bugsnag installation is low as an exploit is only possible if the attacker has access to the Bugsnag On-Premise services. However, we recommend that you upgrade your installation as soon as possible, and if not already done restrict access to your Bugsnag services (see guidance here).

We’ve made enhancements to the memory diagnostics we capture for errors in Android apps, including total memory, free memory, memory usage, memory limit, low memory, and memory trim level. Understanding the memory pressure leading up to a crash and the overall memory health of a device can help you prioritize and fix errors caused by memory pressure with speed and precision.

Read our blog to learn more and upgrade to the latest version of our Android notifier to start capturing these memory diagnostics.

Streamline investigation into your most complex errors by understanding the state of each thread at the time the error occurred in your Android or iOS app. Errors captured in Android apps will now also include NDK thread states in addition to the existing JVM threads.

Upgrade to the latest version of our Android and iOS notifiers to see new thread state information.

If the user’s device is overheating, sometimes the OS can shut down the phone or kill apps and processes that are using too much CPU so that the device can cool down.

Bugsnag now captures thermal kills to provide visibility and diagnostics into these issues. Additionally, new breadcrumbs and thermal state metadata provide further insight so you can streamline investigation and debugging.

Upgrade to the latest version of our iOS notifier to take advantage of these enhancements.

Breadcrumbs will now be automatically captured to provide visibility into network requests that your app made in the run up to an error and how long these requests took. These diagnostics can help you understand if failed or slow network requests are causing errors so you can streamline investigation and debugging.

Upgrade to the latest version of our notifiers to see these additional breadcrumbs and see the Android and iOS docs for configuration instructions.

You can now see scene state and scene lifecycle breadcrumbs for errors in iOS and iPadOS apps built with UIScene. These breadcrumbs log user actions leading up to an error to help you streamline investigation and debugging workflows.

Upgrade to the latest version of our iOS notifier to see these additional breadcrumbs.

The daily and weekly summary emails provide an overview of important errors and team activity. Now, you can also see the app stability score and target indicators in these emails to help you gauge the current health of the app and progress against stability goals.

You have the flexibility to configure these emails to only notify you if the app’s stability is critical or below target. Ready our docs to learn more and get started in Settings under My email notifications.

You can now configure integrations for your projects via Bugsnag’s data access API. This will help streamline the management of integrations such as Slack and Jira, especially for organizations with many projects.

Read our docs to get started.

Gain actionable insights into app stability and user experience, customize error views to keep an eye on errors impacting segments that matter to you, see an activity feed of the team’s progress in triaging and fixing errors, and more.

Read our blog to learn more and see the new Project Overview by clicking on “Overview” from the navigation bar on any project.

You can now add a label for each integration in settings, which will then be displayed with the integration name everywhere else in Bugsnag and help distinguish one integration from another.

This is especially useful for organizations that have, for example, configured multiple Jira integrations with the same Jira project and need to distinguish between these integrations in the dropdown when creating new issues for errors.

You can configure the labels in integration settings.

We’ve added support for breadcrumbs to our Python notifier. Breadcrumbs record events that happen in the run up to an error, making it easier to reproduce and fix.

Breadcrumbs will be automatically captured for HTTP requests and other errors, plus you can add your own manual breadcrumbs. All Python frameworks are supported including Django and Flask.

Upgrade the notifier to the latest version to get started.

We have added a configuration under Kubernetes > Pod runtime mode to configure whether pods should run as root or non root. We recommend not switching between the modes in an existing installation. This is only available in Clustered.

The update includes app hang detection and improved out of memory (OOM) detection on iOS, improved detection of jailbroken or rooted devices, and much more.

See the Unity upgrade guide to get started.

You can now use Bugsnag to manage the stability of your Electron apps. Today, we have full support for capturing JavaScript errors. We’re excited to share that support for native errors is coming this Summer.

Get started by reading our docs.

We’ve added new capabilities to our data access API to allow you to manage bookmarks, which are a set of saved error filters. Bookmarks are useful for keeping an eye on an error segment and also for customizing alerts and integrations.

Read our docs to learn more about how to create, update, or delete bookmarks via the API.

New metadata included in macOS error reports will help you identify if your app was running through Rosetta on a Mac with Apple Silicon, providing additional information to help you prioritize and fix errors.

Rosetta allows apps built for Intel processors to run on Apple Silicon. The new metadata is shown on the “App” tab:

Upgrade to the latest version of our macOS notifier to see the additional metadata.

An improvement to our grouping algorithm for NSErrors from iOS, macOS, and tvOS apps is now available. The improvement will prevent over-grouping of NSErrors by additionally using the ‘domain’ for grouping.

If the grouping improvement applies to your project, it is now available as an upgrade in Project Settings > Group errors > Default grouping.

Bugsnag now has full support for iOS apps running on macOS, either through Mac Catalyst or natively on Apple Silicon Macs.

Diagnostics for errors captured include the model of Mac the app was running on, the version of macOS, and the version of iOS that Mac Catalyst provides, so you can triage and resolve errors when your iOS app is running on a Mac.

Upgrade to the latest version of our iOS notifier to take advantage of these enhancements.

Filter for an empty field to streamline error investigation

When filtering through errors, you now have the ability to filter by the absence of a default or custom field, to help you streamline error investigation and debugging. This can be useful to isolate errors that don’t have a value for a particular field, for example, when investigating errors in feature flags, you can understand if these errors are occurring outside of feature flags too.

See the new [empty] filtering options in the search builder and pivot tables. 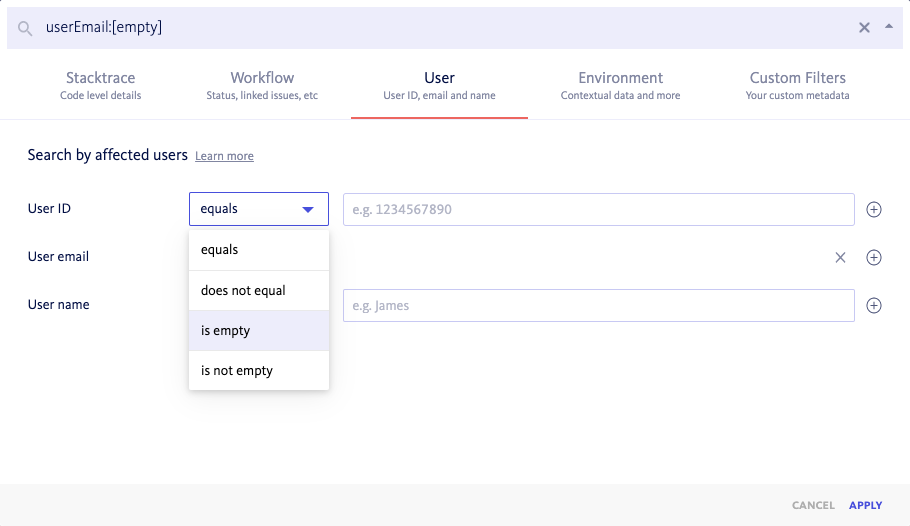 We've made some changes to the dashboard to improve the performance.